This article appeared, in May 1990, in a PWI derivative magazine called Wrestling Classics . The magazine concentrated on classic wrestlers such as Jack Brisco, Terry Funk, Ivan Koloff and Hackstacks Calhoun. Tom Zenk was the only contemporary wrestler featured and, in this case, as a 'Future Classic,' tipped to become World Champion. The article was written shortly before Tom Zenk and Brian Pillman took the World tag team titles. In the Ratings Section of the magazine, Zenk already appears at No 7 among the top 10 of the NWA - behind World Champion Ric Flair, Lex Luger, Sting, Arn Anderson, Buzz Sawyer, Great Muta, Steve Williams and Brian Pillman -  in short, among wrestling's elite.

In the course of the interview, Zenk makes several  interesting points. One of these significantly qualifies his ambition to remain among the elite,  - "There's a word for what I am: a sleeper. Nobody expects me to go all the way, so when I do, it will be much more satisfying." This reflects a common perception that Zenk's approach to wrestling was never the sort of total approach that characterized many other wrestlers; that he was never prepared to sacrifice all, including friendships, for the notoriously evanescent success offered by wrestling promotions. The second point confirms the image we've already established - of Zenk's concern, above all, for independence - a "lesson in life" which arose from the dissolution of the Can-Am Connection and was carried forward through his wrestling career.  Zenk summarizes this lesson as follows -  "Martel always insisted on doing things his way and no one else's .... Well, I couldn't live by those rules, so I got out of there in a hurry. I resolved that never again would I put myself in a position where I'm not the one calling the shots." A close reading of this article suggests that the writer scores Zenk over Pillman, in terms of wrestling ability, contrary to the line pushed by NWA and the general promotional press.   Rodriguez makes coded reference to the heavy career promotion Pillman was receiving (over Zenk)  from Ric Flair. Flair, at this time, was both World Champion and senior NWA booker. 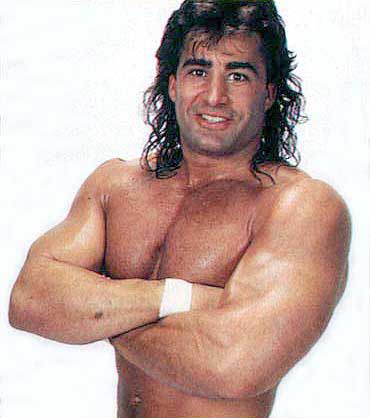 "Z-Man" Tom Zenk has spent months in the shadows of the superstars, but that doesn't mean he's not good enough to attain greatness. Don't be fooled: Zenk could be World champion someday, and the NWA's top stars know it!

Success in the ring sport is not something that's easily achieved. It often takes many years before a wrestler reaches the point where he can say, "I've made it."

Tom Zenk knows that better than anyone."I always strive to be the best," Zenk said recently before a match against Kevin Sullivan, "but I also knew success wouldn't come overnight. I've worked harder than anyone in this sport to get where I am." Where Zenk is right now is in a position where the NWA's elite must respect his talents. He may not have achieved complete success - yet - but the "Z-Man" is well on his way to greater heights.

"Nothing less than the World title will do," Zenk says. "That's why I became a wrestler, to wear that gold around my waist. I may be at the end of a long line now, but when my opportunity comes, watch out! There's a word for what I am: a sleeper. Nobody expects me to go all the way, so when I do, it will be much more satisfying."

A sleeper - sounds appropriate for someone nicknamed "Z-Man." So is it any coincidence that his favorite finishing maneuver is .... the sleeper?

"Actually, it is a coincidence, " Zenk said with a laugh."I happen to like that hold very much. There's nothing more effective to force a submission. I love feeling the fight draining out of my opponent's body. The second he goes down, there's one less person in my way to the title."

Indeed, Zenk considers his path to the title a direct one. Knowing "Z-Man's" ambitions, some big names in the NWA have made a habit of keeping their eyes on Zenk all the time.

"Hey, I wouldn't want to wrestle him right now," said Sting. "He's a man on a mission. I don't care how low on the card he is, Tom is a real threat to every belt around here."

"That young man means serious business," said Arn Anderson. "Forget the great physique, he can flat out wrestle. Believe me, now that I'm NWA TV Champion, I'm taking a second look at Zenk. He's got real potential to be trouble."

"He's good," Lex Luger admitted. "Damn good. No match for me, of course, but then again, who is? Still, Zenk's a talented kid. I question his guts, though. He has a history of running when things get hot. In this sport, that's not how you win."

Luger is referring to a couple of experiences that Zenk has struggled to put behind him.

In 1987, for example, Zenk and Rick Martel came to the WWF as the Can-Am Connection. After only a few months, the team broke up. Zenk says he learned a valuable lesson about wreslting ....and about life.

"Martel always insisted on doing things his way and no one else's," Zenk related. "Well, I couldn't live by those rules, so I got out of there in a hurry. I resolved that never again would I put myself in a position where I'm not the one calling the shots."

Then, in February 1989, Zenk almost - almost! - won the AWA  World championship. It came down to Zenk and Larry Zbyszko battling it out for the belt in the last minutes of the battle royal designed to fill the vacant title. The moment Zbyszko was awarded the belt, Zenk knew what he had to do.

"Zbyszko's a crafty veteran," Zenk said "You might even say he psyched me out. It was his night. Sure, I got tired of wrestling a man who didn't take his title responsibilities seriously. I decided the AWA wasn't the place for me. I don't care what anybody says; it wasn't a question of chickening out."

Last summer, Zenk arrived in the NWA with an intense desire to win. Perhaps now, he thought, his day in the sun would finally come.

But not so fast. An ever-growing list of title contenders kept from those title matches for which he was so desperate.  Zenk admits he was caught off-guard by the crowd of talent.

"I knew those first few weeks wouldn't be a garden party," Zenk admitted, "But I thought so highly of myself that I couldn't believe those title shots weren't coming quicker. It was a humbling experience."

Zenk became even more frustrated when he saw his good friend Brian Pillman capture the hearts of the fans. Pillman had been fortunate enough to hook up with [obtain a promotional push from] World champion Ric Flair, and the ensuing attention helped him gain U.S. title matches against Lex Luger. Still, Zenk refused to be critical of his friend and tag team partner.

"Brian deserves everything he's achieved, "Zenk said at the time. He's worked hard for it, and the long hours of sweat are paying off. My day will come soon enough, then Brian and I can enjoy success together."

As a team, Zenk and Pillman are enjoying success. In a federation laden with tag team talent, they are in strong contention for the World Title belts. Their smooth blend of science and power makes them a pleasure to watch. But for both men, and for Zenk, in particular, even that title wouldn't be enough.

"I know how hungry this guy is," Pillman said, "Boy, do I know! You should see him in the gym. He really pushes himself, a little too hard, if you ask me. He's always talking about how he'll win the World Title. It's hard to believe this guy won't have a title belt around his waist before the end of the year."

Don't bet against it.

Post script. By the end of 1990 Zenk had picked up and dropped the US Tag Team Title (with Brian Pillman) and was holding the WCW World TV Title (from Arn Anderson).